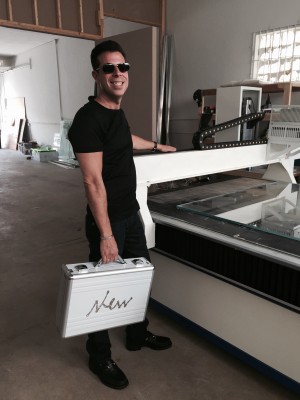 R. David New was born in 1970 in Philadelphia, PA. After attending prep school at the Germantown Academy, David began his university studies at the Mason Gross School of the Arts at Rutgers University. He continued is education at the Tyler School of Art, Temple University, the University of the Arts in Philadelphia, the Fashion Institute of Technology in New York City and The Art Institute of Fort Lauderdale. An artist at heart, David worked in his family’s furniture business while creating his own interior design firm, R David New Interior Design. David relocated to South Florida and continued pursuing his passion for art and design.

After losing his sight in 2001 from a rare eye disease, David has since become an advocate for people with disabilities everywhere. He is currently chairman of the Miami Beach Disability Access Committee and President and chief promoter of Power Access Inc. and Ability Explosion®. David also serves as president for the Miami Beach Council of the Blind (an affiliate of the Florida Council and the American Council of the Blind). In 2012, David took over Access Now Inc. which is an advocacy organization for enforcement of the Americans with Disabilities Act.

David New is a resident of South Beach in Miami Florida.